The last 550 millions years of the Earth History are recorded in the Sobrarbe-Pirineos Geopark. Rocks formed in two different seas, the roots of the enormous and totally disappeared variscan range and, of course, a detailed record of the making of the Pyrenees. Large folds and thrusts, all kind of rocks, unique fossils, deep gorges, glaciers and infinite caves… all the Sobrarbe’s landscape offers you the best of the Pyrenees in a glance.

a geopark of mountains

Sitting in the heart of the Pyrenees mountain range, the Sobrarbe-Pyrenees Geopark spreads over the highest peaks as well as the more accessible parts of the mountains. Natural and cultural heritage have coexisted for millennia in this varied territory set in a spectacular landscape. As well as the Geopark, Sobrarbe boasts other seals of approval from UNESCO; those of World heritage, Bio-sphere Reseve and Immaterial Heritage complete the set.

With staggering natural events stretching back 500 million years, Pyrenean history has been written into the rocks of its mountains. From its ancient mountain ranges and dry deserts to its deep seas and tropical deltas, the secrets to the mountain’s origins lie here in Sobrarbe to be unlocked. Dramatic
geological folds, the last of Spain’s glaciers, never-ending caves, gulleys and canyons or the Pyrenees’ last great unspoilt river, are just some of the attractions visitors can expect in this internationally recognized landscape. The Ordesa and Monte Perdido National Park sit within the Geopark alongside parts of the Posets-Maladeta and Sierra and Canyons of the Guara park.

These mountain landscapes are accessible by many means. Sobrarbe has more than 1000 kilometers of signed footpaths and tracks. Amongst them are some 30 Geo-routes with explanations of the landscape along the way. As well as enjoying the views, if you really want to understand the landscape you can take one of 13 mountain bike routes with explanation boards, one for cars, a geo-mining circuit or a via ferrata route with geological information panels. These routes are for all ages and levels.

Sobrarbe’s cultural legacy however, is no less significant. The brightest gems of Pyrenean culture are to be found in our valleys. Charming villages proudly show off their traditional architecture alongside megalithic monuments and cave paintings. There are no end of Romanesque churches and medieval castles perched up at dizzying heights. Village fiestas, traditional dancing, open air feasts, carnaval , the world famous Navatas descent of the River Cinca in May or local music festivals are just some of the reasons why thousands of tourists come to this region, and they are a testimony to man’s integration into the landscape.
Gastronomy and wine also play an important role in the makeup of Sobrarbe’s character. Traditional mountain cuisine mixes effortlessly with more modern culinary tendencias in small restaurants all over the Geopark. Local, organic, and important not only to the restaurants within the Geopark but also to the local administration which supports its producers.

Around 100 local businesses collaborate with Geopark. Whether its accommodation, restaurants, adventure tourism, arts and crafts or food, they all share the same philosophy of UNESCO World Geoparks when it comes to offering quality service.

In a nutshell, the Sobrarbe-Pyrenees Geopark is the place to come and enjoy the mountains in many ways within a carefully nurtured, first rate natural environment.

A paradise in the highlands, a geopark of mountains in the northeast of the Iberian Peninsula. 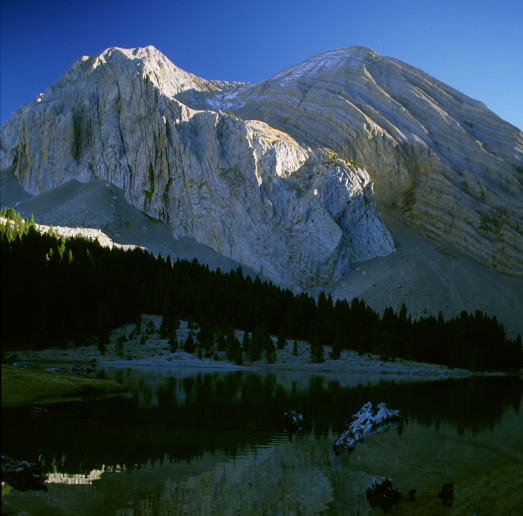 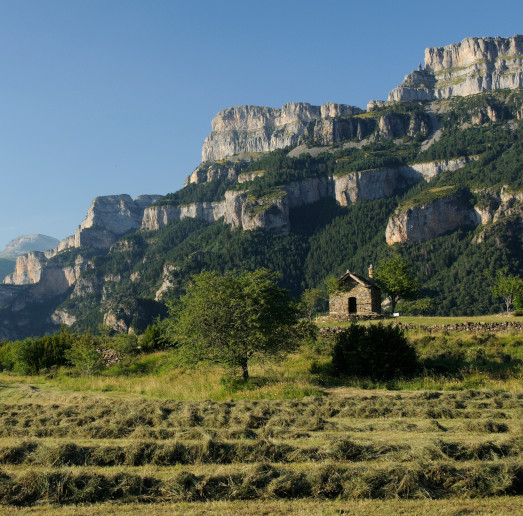 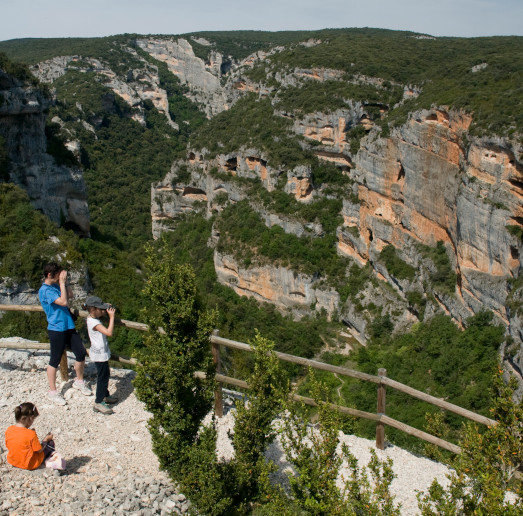 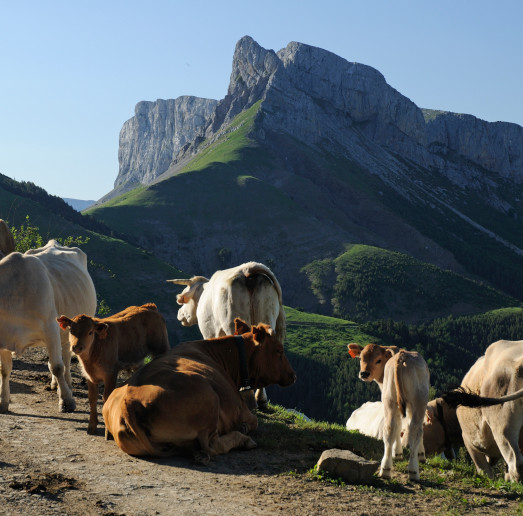 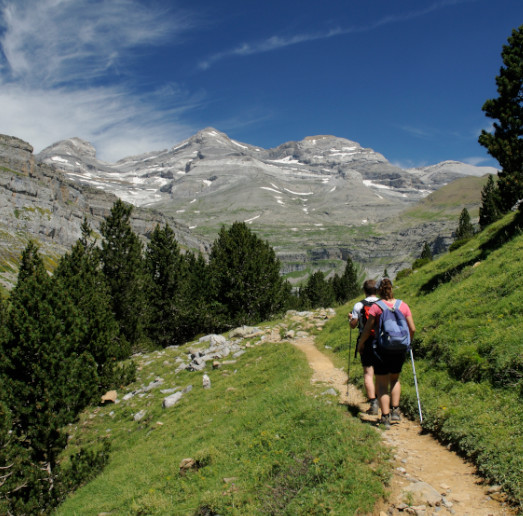 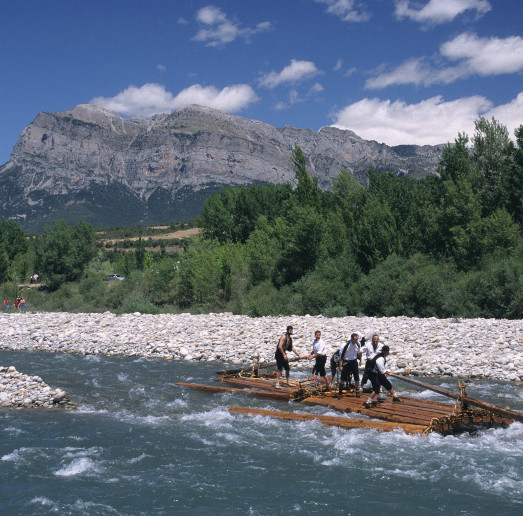 Peña Montañesa and timber rafts down the Cinca River 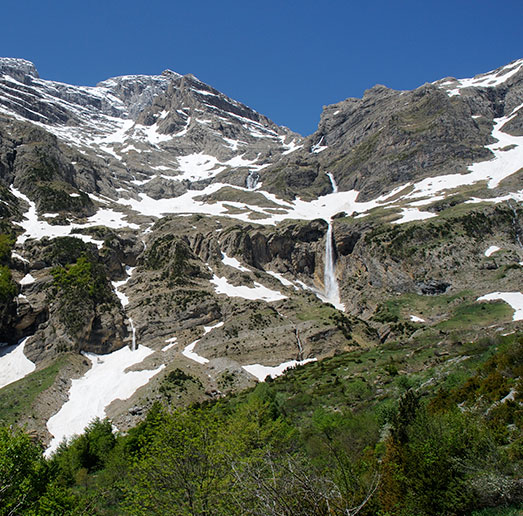 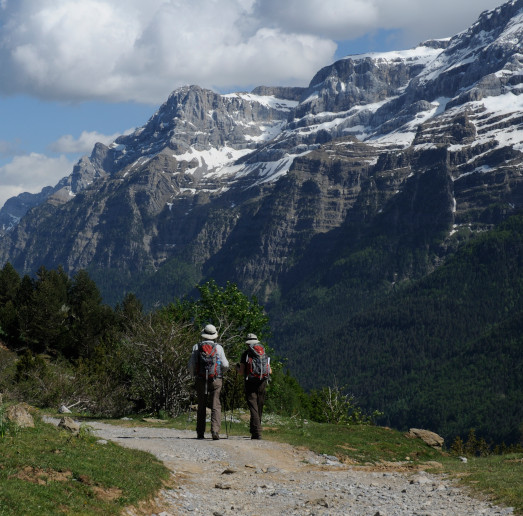