All about Cabo de Gata-Níjar

The Cabo de Gata-Níjar Geopark is located in Andalusia at the southeastern margin of the Almería province (Spain), flanked by the Mediterranean Sea on the right and surrounded by the municipalities of Níjar, Carboneras and Almería.

Cabo de Gata-Níjar UNESCO Global Geopark has been part of the European and Global Network of Geoparks since 2001, and is a UNESCO World Geopark since 2015, after the approval of the Earth Sciences and Geoparks Program.Its climatology, with average temperatures of 22º, the absence of thermal winter and the privileged geological environment in which it is located, makes all these aspirations find in the Geopark of Cabo de Gata -Níjar the perfect scenario for its development. Its coastline of volcanic origin, plagued by small coves and large beaches; its transparent waters and its ethnographic heritage, fruit of the interaction of the man with a hostile environment, are the signs of identity of the Geopark.

The Geopark of Cabo de Gata-Níjar is also a Marine-Terrestrial Natural Park (1987), Special Protection Area of Birds (1989), Biosphere Reserve (1997), Zone of Special Importance in the Mediterranean, SPAMI (2001 ) and RAMSAR (1990), among other protection figures, as Special Conservation Zone (SCZ).The spectacular geology of the Geopark is marked by two large and very different units, the Sierra de Cabo de Gata and Sierra Cabrera, of volcanic an metamorphic origin , and its sedimentary deposits, represented by fossil coral reefs and the deposits of the Bay of Almería.

The Sierra de Cabo de Gata is the part of the Cabo de Gata Volcanic Complex which is above the surface. This complex is an enormous volcanic area hidden under the waters of the Alborán Sea and reaches the African continent. Its volcanic materials form the most iconic landscapes of the Geopark, such as Playa de Mónsul, Los Frailes, or Playa de los Muertos. These rocks, the result of the stretching after the collision between Africa and Europe, are between 14 and 7 million years old, and are the living witness to the turbulent past of the Mediterranean and the likely passage of species between Africa and Europe. The other part of the Sierra de Cabo de Gata is made up of Sierra Cabrera and its metamorphic outcrops, from the rising of the Betic System, which can only be observed in the northern area of the Geopark.

From the first volcanic episodes until the last, the sea invaded the volcanic reliefs, generating and extensive archipielago. In the marine basins located between the sea floor reliefs, sedimentary deposits were created, more specifically five, from the early Tortonian to the Pliocene Epochs. These basins left behind a catalogue of biolcastic carbonates, reefs, bioherms, diatomites, breccias and many more. In these basins you can find evidence of events as important as the Mediterraean Messinian Salinity Crisis , when the eastern zone dried up practically in its entirety as a result of its disconnection from the Atlantic Ocean.
At a given moment, during the Messinian ( about 7 million years ago)the water temperature allowed coral reefs to form. These reefs developed in the upper areas of the volcanic reliefs. The best examples are La Molata de Las Negras, Mesa Roldán, and Cerro de los Lobos, among others.

Meanwhile, in the Bay of Almería, and 5 million years ago, the sea occupied all the low areas from Sierrra Alhamilla to the Andarax Valley and Campo de Níjar, and the only areas that could be found above the surface were the Sierra de Cabo de Gata and Serrata de Níjar. Afterwards and due to the successive climate changes, the sea level increased an decreased with variations of up to 130m. These variations were recorded in a privileged register where we can find all the distinctive sedimentary environments from continental ( alluvial fans, dune systems…) to coastal and transitional ( underwater deltas in riverbeds, beaches, lagoons…). All these deposits make up the other side of the Geopark, which tell us the story of the recent Mediterranean coast.

In the Geopark there are more than 1,000 species of flora and 1,500 of fauna, many of them endemic, forming one of the most unique, diverse and unique areas of Europe. Among the fauna include steppe and aquatic birds. Coastal waters shelter a population of more than 1500 species of marine flora and fauna. Posidonia Oceanica meadows, the largest in the Mediterranean, are a natural refuge for sea urchins, starfish, sponges, mollusks and large numbers of fish.

A wild paradise to preserve 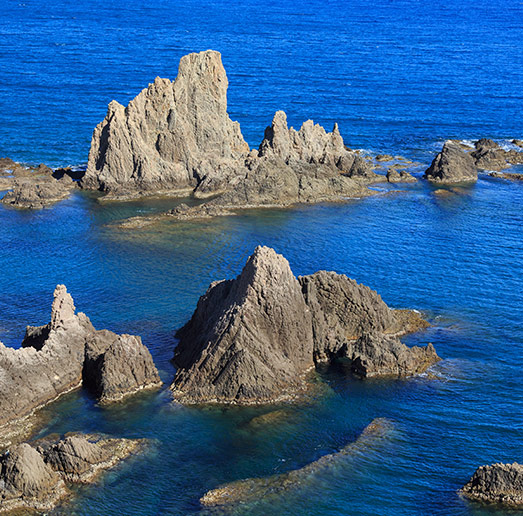 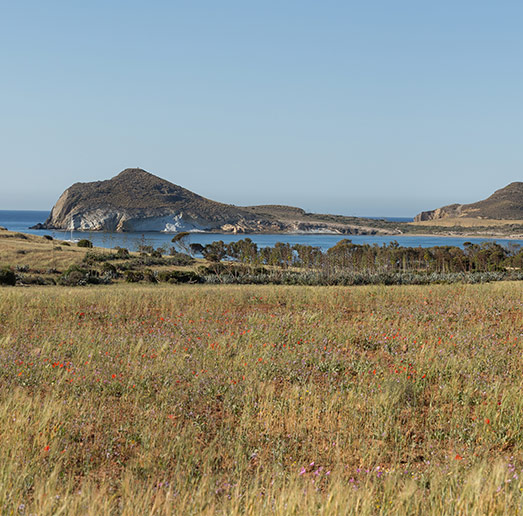 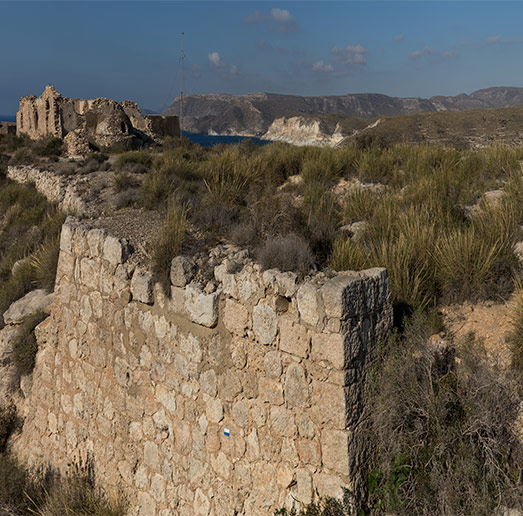 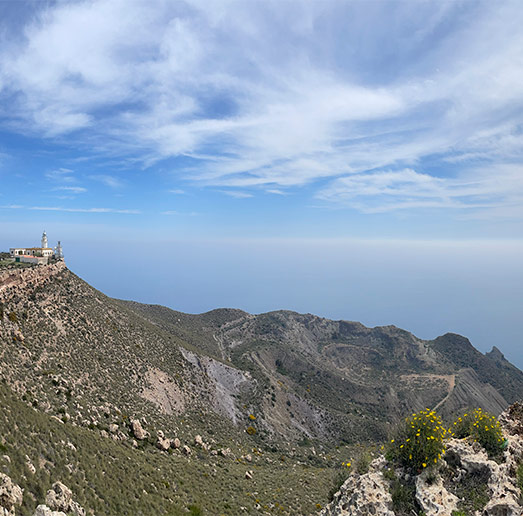 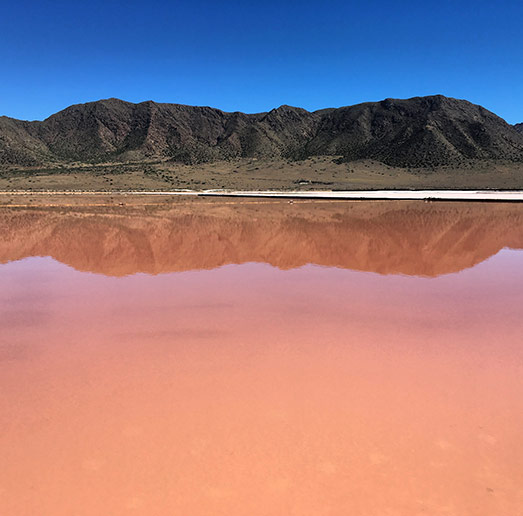 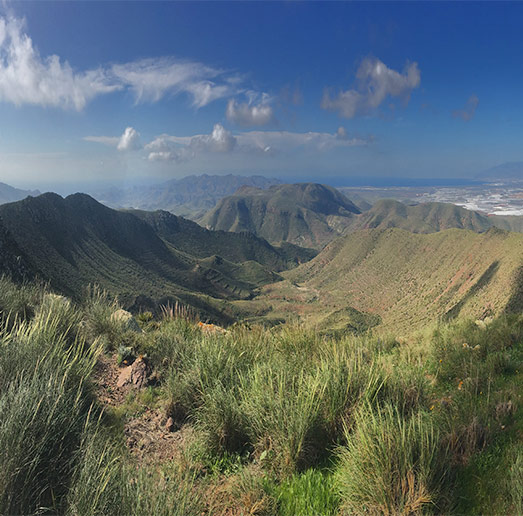 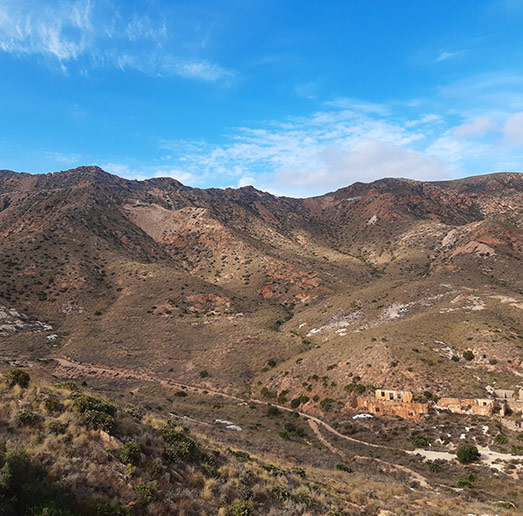 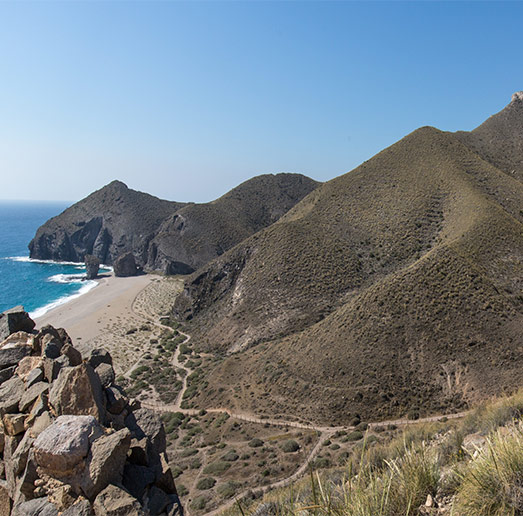